I spotted this wonderfully happy mural on a building in Glasgow as I was about to embark on a tour through the Highlands.

There is actually a young family that lives here in the castle. The 2012 Christmas episode of Downton Abbey was partly filmed here. 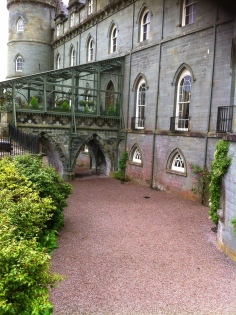 Shared with Our World Tuesday

Iona Abbey is located in the Inner Hebrides Islands on the Isle of Iona on the west side of Scotland.  It is one of Scotland’s most historic and sacred sites, well worth seeing.  It is very peaceful and beautiful.  For more history on the buildings and crosses read here. 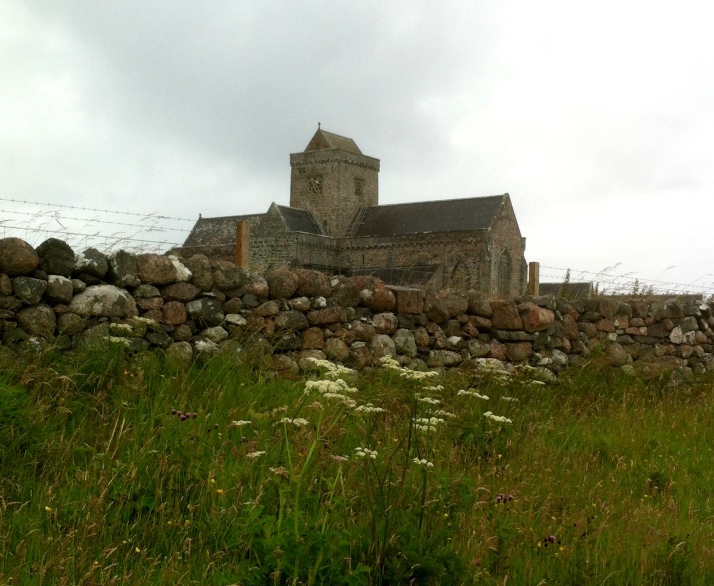 Right behind the St. John’s cross is the St. Columba’s Shrine 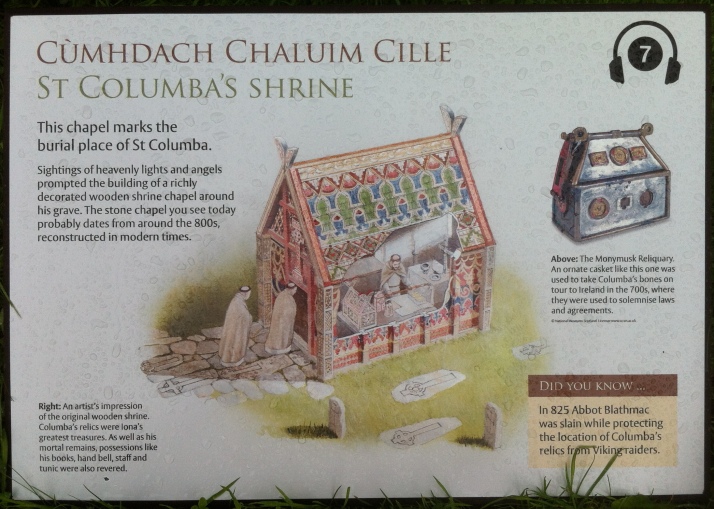 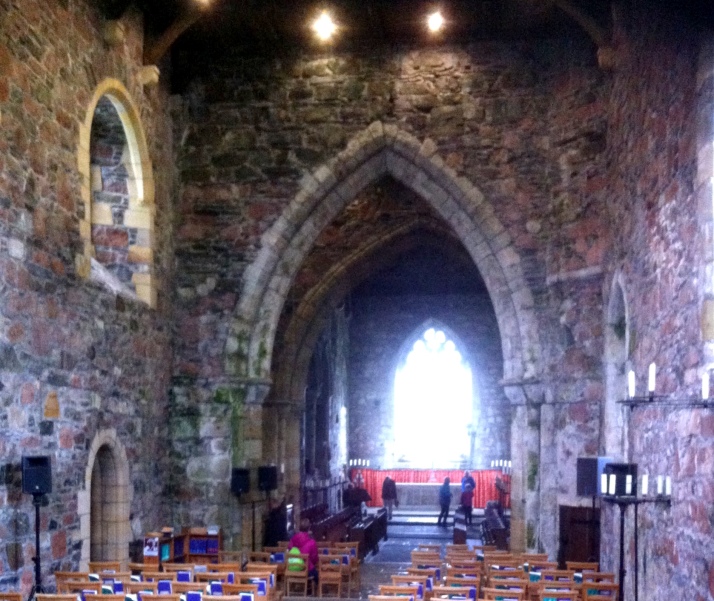 Here are some views inside the abbey. 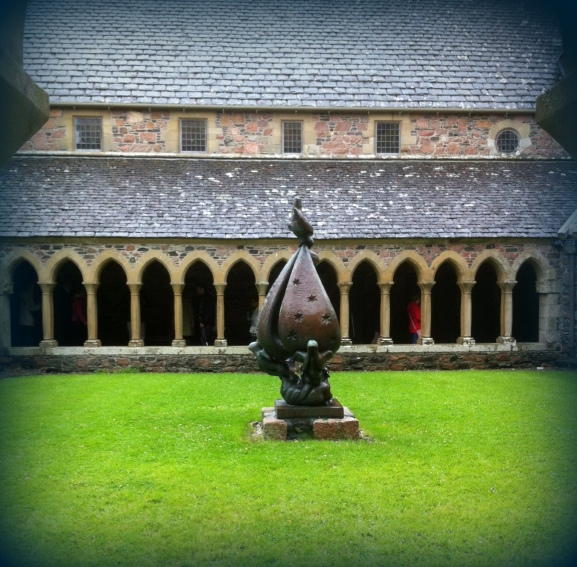 I enjoyed this tour of Iona and Mull the best of all my sightseeing here in Scotland.  Here is a view of the Forth Bridge and building of the new one on our way home.

Stronghold of Stirling
To protect and defend all
Bastion of Scotland 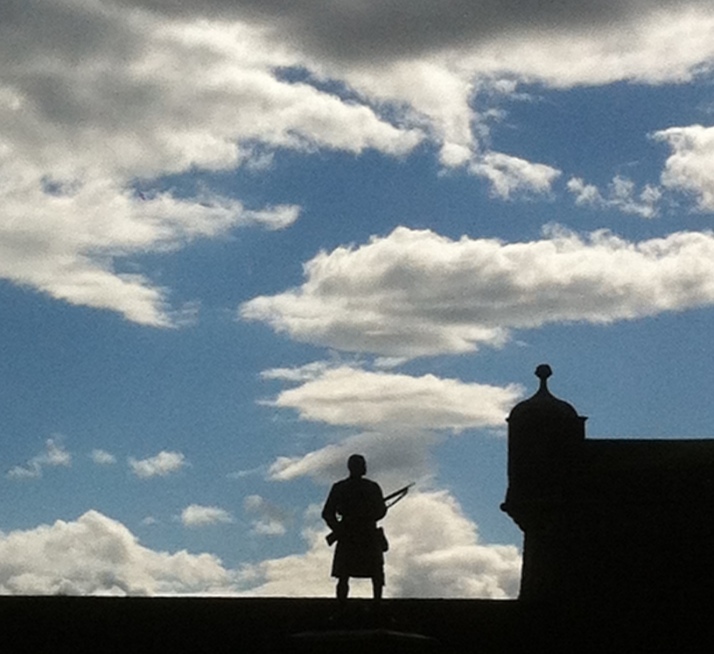 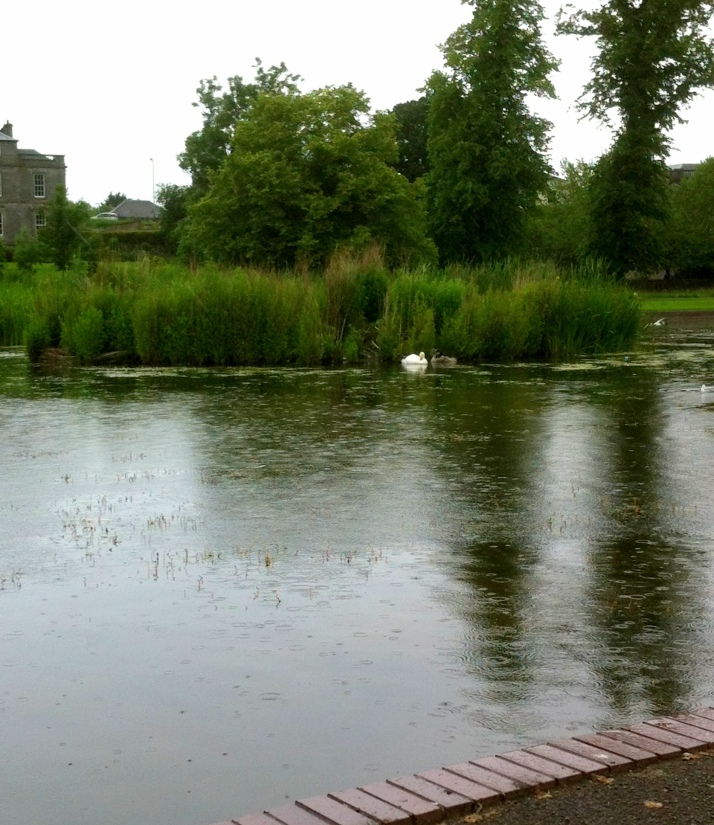 I was quite excited about visiting the Stirling Castle as I had heard it was one of the most historic castles in Scotland. If you would like to read some of the history, with some amusing events cited, there is a timeline from its beginning in 1107 through to the present day, and some other interesting facts here. (Click at top of the page for the Timeline).
.

Robert Burns scratched this poem on the window of the Wingate’s Inn after visiting the castle in 1787. 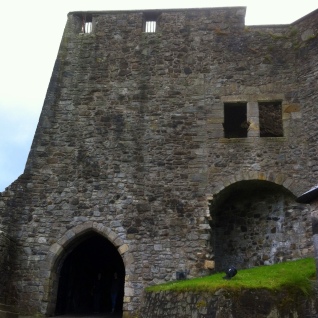 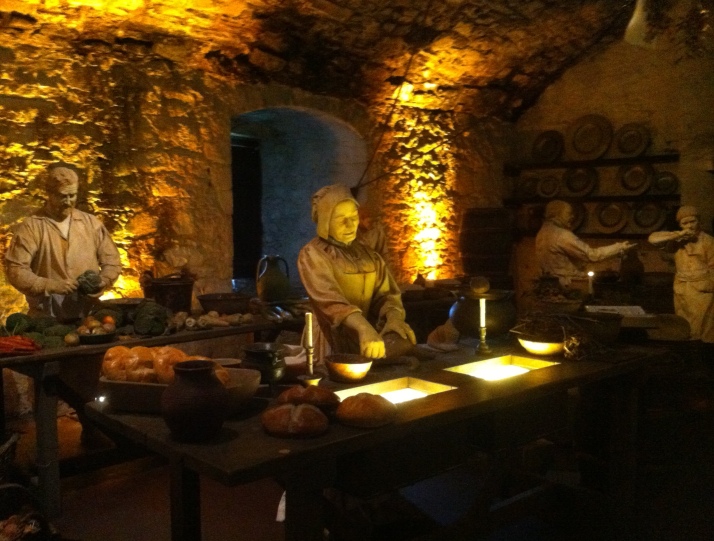 There are life-size figures preparing food in the Great Kitchen with displays of all the varieties of foods they would have grown and eaten in those days. 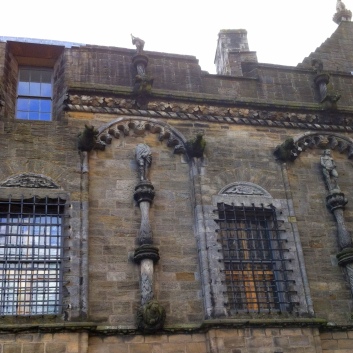 The Palace of Stirling Castle was built by King James V in the mid-sixteenth century.    There are many sculptures adorning the outside walls of the palace which represent the prosperity and greatness that his regimen would bring. 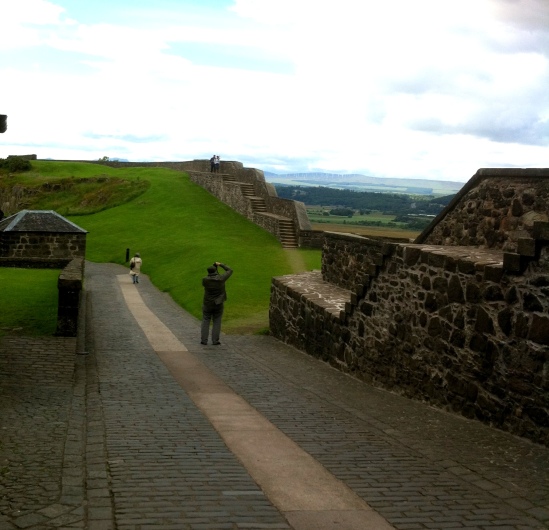 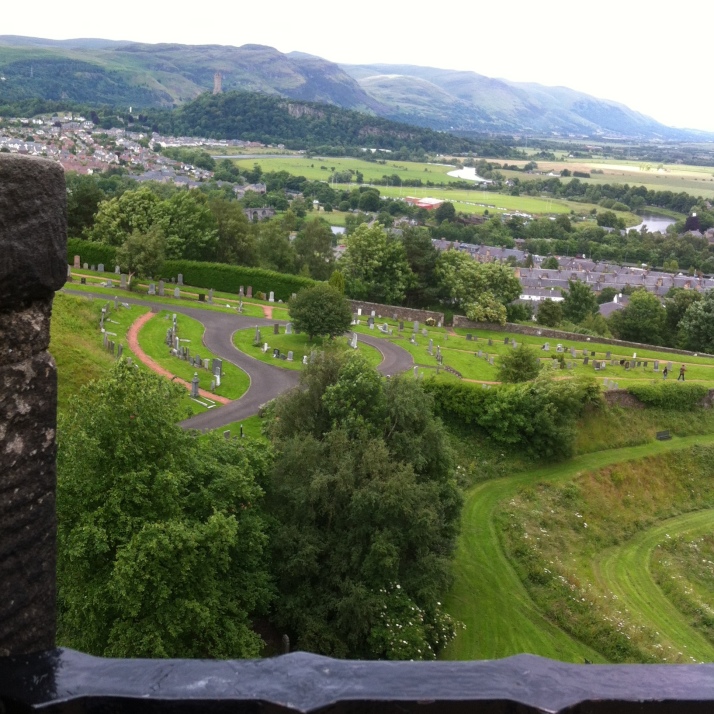 In the graveyard, the graves of merchants and traders are carved with signs and symbols of their craft or trade.

Returning to Perth, I took some photos of the beautiful countryside from the train. 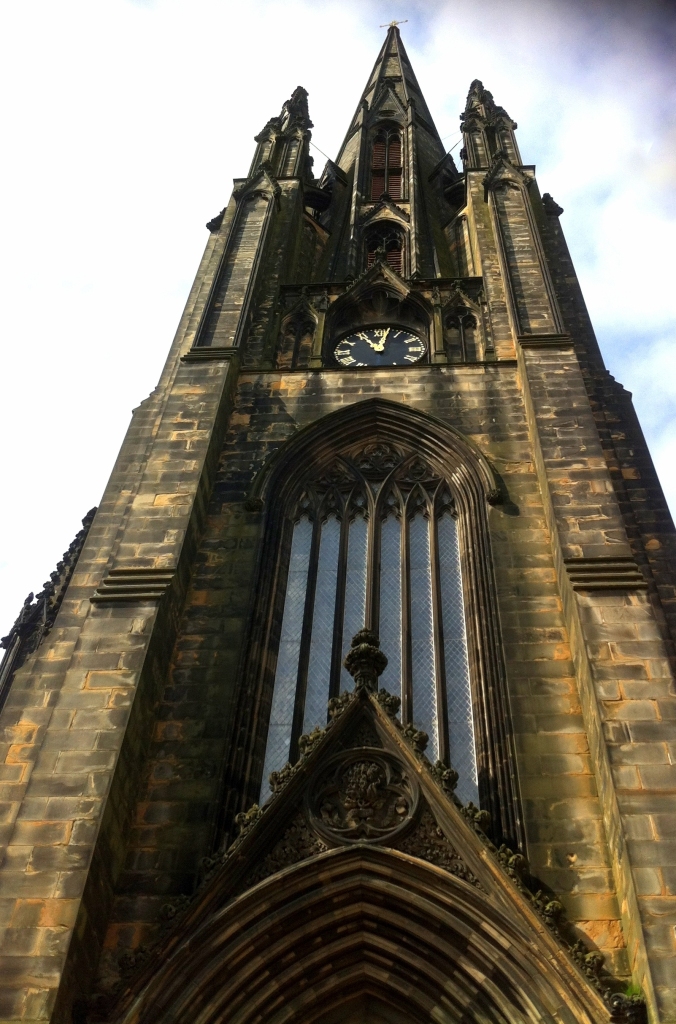 Scenery on train from Edinburgh to Perth, Scotland 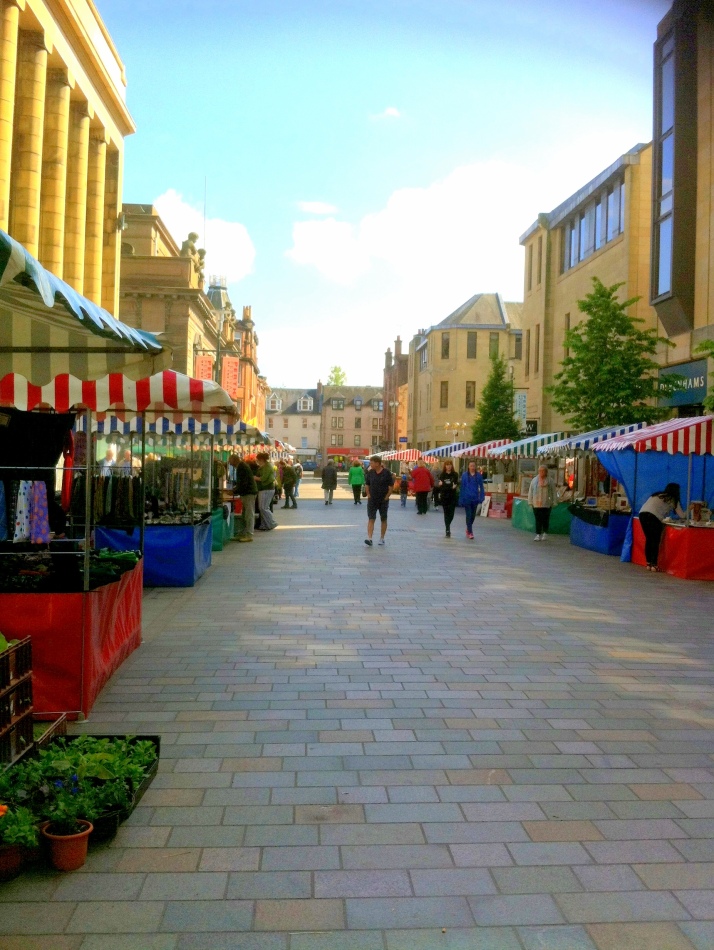 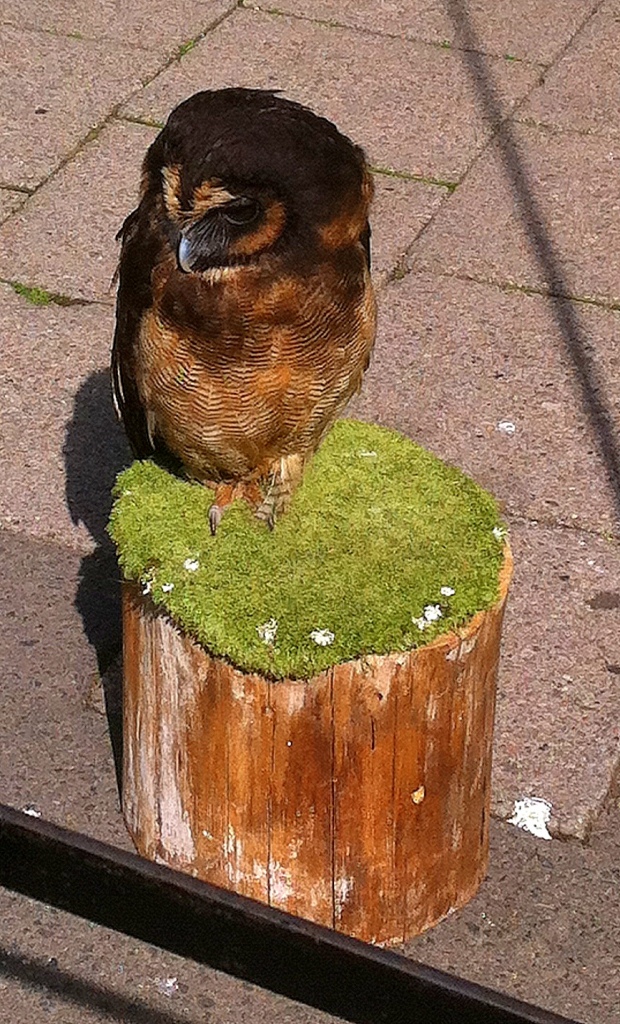 There were even some creatures at the Artisan’s Fair!