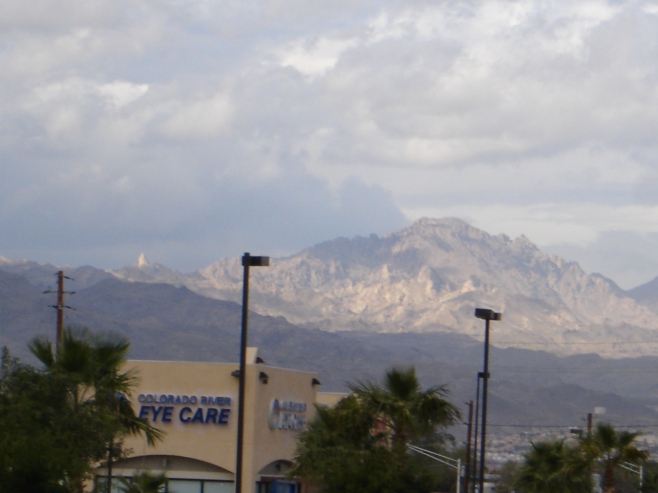 This is a response to Artsyville’s meme “What do you like about where you live”?
I’ve lived in the low desert of Arizona, just five miles from the Colorado River, with Nevada five miles to the West and about ten miles from Needles, California to the southwest since 1997. When my husband and I moved here from Northern California we would often remark when going to town on errands, “this is just like being on vacation”. Traveling on the main highway, the traffic is light, the mountains are off to the left and to the right. For people who live on the East coast and have never been out West: the mountains out here are like giant hills of rock and sand – not like the grassy green mountains on the EC. But, they are still enjoyable to look at, particularly with the vastness of the horizon and the clear blue skies – yup, the wide-open spaces! Fort Mohave has a population of about 15,000 and the neighboring city of Bullhead City has a population of about 39,000+.

I like the weather here for about eight months out of the year with temps in the mid-70s to low 40s. Now the summer months are something else! Usually by May the temperatures have reached 100F and by July are in the teens – like 113-119F and then August gets in the 120s on some days. That’s when I choose to stay in the house and blog, make art, play WWF on Facebook, and generally anything that will take me away from housework :). When first moving here, like the first six years, I tended to stay at home and do my own thing. Then I moved my mother here from Cape Cod when she was 92. She also is an artist; so I enrolled both of us in the local art organization. I did this mainly for Mom, so others could see what a great artist she is (was). But it turned out to be one of the best moves I had made since moving here. That is when my art world opened up to me through acquaintances and friends in the community and the community college.

To make a long story short, “What do I like about where I live”? By far, the wonderful friends that I have made over the past nine years, both in the art community, my local P.E.O. chapter, and the church community.

Sorry, I have to mention, if you were wondering what kind of entertainment might be available out here in the low desert – right across the river in Nevada is the town of Laughlin, which is a mini-scale Las Vegas, with plenty of casinos. If you don’t care to gamble, all of the casinos have fabulous restaurants and buffets to choose from. And ninety miles away is Las Vegas where we go every now and then to visit my brother and sister-in-law and doctor visits. 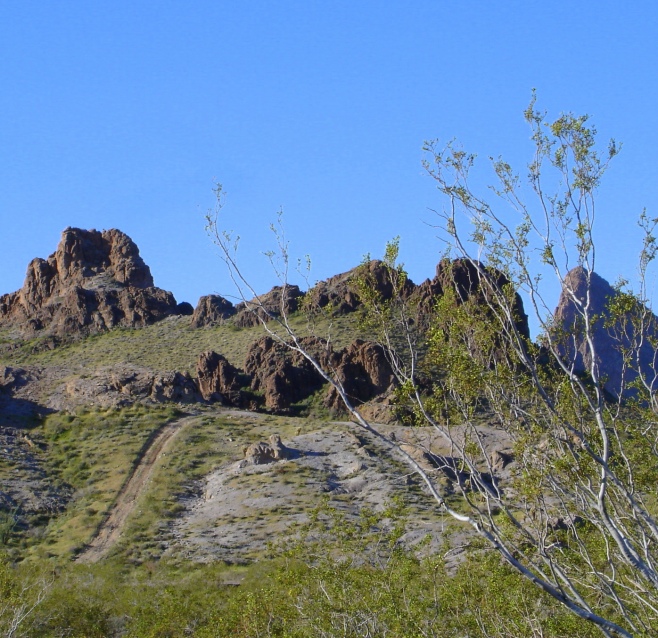 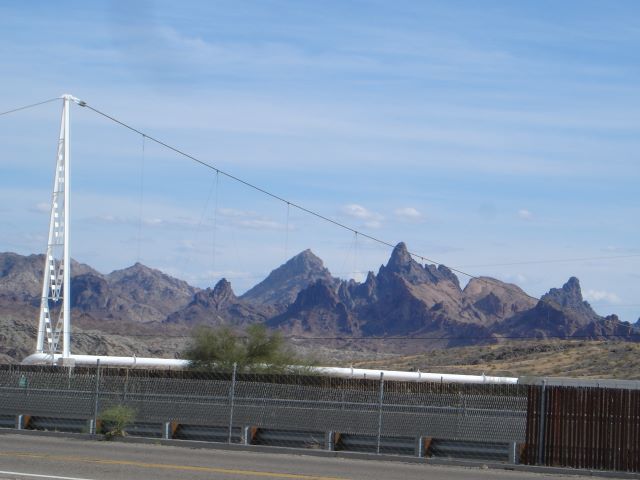 Mountains outside of Las Vegas, Nevada

View from my backyard.

Today on Another Sunday Scavenger Hunt we  were supposed to find photos to relate to five words: Mobile; Hanging by a thread; a collage; always look on the bright side; and, home using fresh photos taken this week.  Well, fortunately I did use my camera this week and was able to use all but one photo from this week and one from my archives of pixs (which is allowed under the rules).  Here goes!

I guess this is a great way to be mobile! 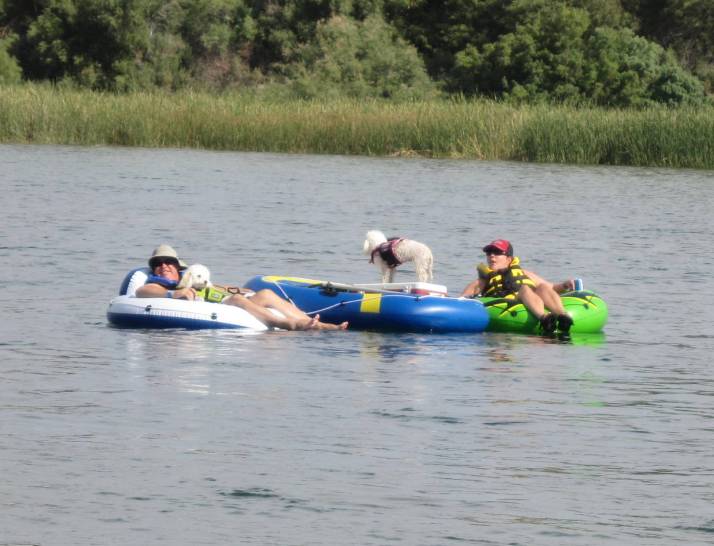 This weekend Bullhead City had their sixth annual River Regatta- rafting down the Colorado River for eight to nine miles.  The city was expecting about 30,000 people to participate this year – amazing considering there were probably under 100 participants the first year!  But word had spread to the four corners of the USA and water lovers and river rafter lovers from all over came.  My sister-in-law and I found a not too populated area on a boat ramp where we snapped away for several hours.  The actual rafting went from 7 am till 2:30 pm and prizes were given out for best decorated floats.  Where we were standing the temperature was 108F but the Colorado River was ice cold!  My SIL stood in the water to stay cool and I sat in a chair and poured water all over my body and head to keep cool.  Thoroughly enjoyed it!

Hanging by a Thread

After more than two weeks of flooding, searching for the plumbing leaks, having  more than fifteen holes cut in the walls and jackhammering the floor, I was hanging unto my sanity by a thread! 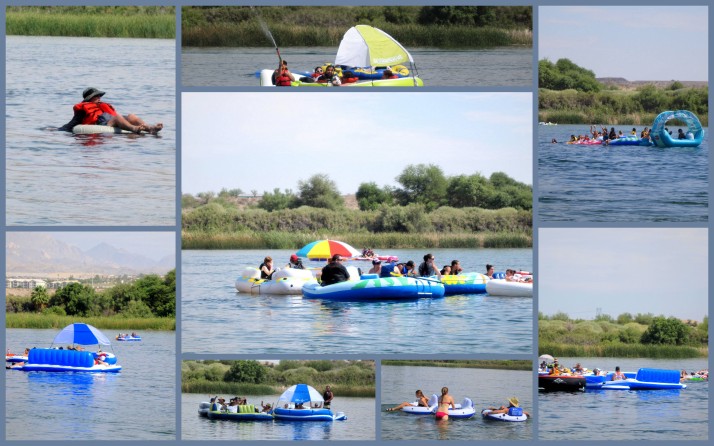 Always look on the bright side

A rainbow always follows the rain

It may seem silly, but when I was looking for a photo that brings to mind “home”, when I came to this one, I thought,  this is it!  About six years ago we bought this “cocktail” tree – or a multi-citrus tree.   It grows naval oranges, valencia oranges,  limes, and mandarin oranges.  The problem is  it sits in the wide open spaces, receiving the sun all day – here in the low desert where the temperatures in the summer reach 120+F.  The first three years I put up an assortment of coverings, the kind you use for camping or a small half umbella like you use on the beach.  But with the high winds we get, inevitably by the end of the hot season they were torn into shreds – not even worth trying to repair.  The next two years I figured maybe the tree was “tough” enough to endure the extreme heat, but it lost a lot of leaves and turned sunburn yellow.  After agonizing over this, and trying to figure what I could put over it that would still be easy to remove if the winds suddenly came up, voila! I thought about the trellis formation I put up a few years before to grow my cantaloupes and tomatoes on.  Why couldn’t I use the same type frame for a cover over the citrus tree?  So, I went the hardware store and bought some 2’rebar, 70″ conduit and 4 couplers; poured some stucco into the hole I made for the rebar, put the rebar in and when the stucco dried put the conduit pipes over the rebar.  Then I joined a 5′ pipe across the top with the couplers.    I had some green patio screen covering that let’s the light and air in but keeps the sun out.  Right now I attach it with some thin wiring but I think maybe I’ll try some sort of velco strips to hold it in place which would make it easier and faster to pull off – like a few days ago when a fast-moving dust storm hit with 60-mile winds it seemed to take forever untwisting that wiring while holding up one of the pipes that had come lose from the coupler.  If anyone has any good ideas, pass them my way 🙂

In case you are interested, here is the video I took of the rafters going down the Colorado River.