Wild Bird Wednesday is here again.  This little duck – is it a mallard?  I think so but I’m not a bird expert.  My sister-in-law and I were at the river regatta  a week or so ago filming all the rafters going down the Colorado River when this duck sails in, looks at the 8-10 people, most of them taking pictures with their cameras and she’s staring intently at us, like, “here I am, take my picture” – I swear, that’s what her intentions seemed to be.  She’d start swimming off, then think better of it; come back and stare at us – Wait!  It just dawned on me, the two viewers in front of me had cameras with big zoom lens, maybe she thought they were some sort of ducks with funny bills!  Anyhow, I’ve got ducky to thank for my participation in the WBW today.  Hopefully, my luck will stay with me and some little bird in the backyard will pose for me in time for next week’s entry. Happy hump day!

These little mourning doves built their nest in the palm tree right outside my front door. They used that nest for about three years but then the tree started leaning more and more and they stopped nesting there. This is a photo I took a few years back that I will share with Wild Bird Wednesday

The poem above is my first attempt at a word cinquain – a five-line poem consisting of one word on the first line, two words on the second, three words on the third, and a whole short sentence on the fourth and one word on the fifth line, which should be a synonym for the noun on the first line. And the second line should be two adjectives describing the noun on the first line. The third line contains three verb words ending in -ing which describes the noun in line one. The fourth line one short, complete sentence about the noun in line 1. And fifth line is one word (noun), synonymous with the first line noun. Here is a link to a good explanation of a cinquain and several examples. 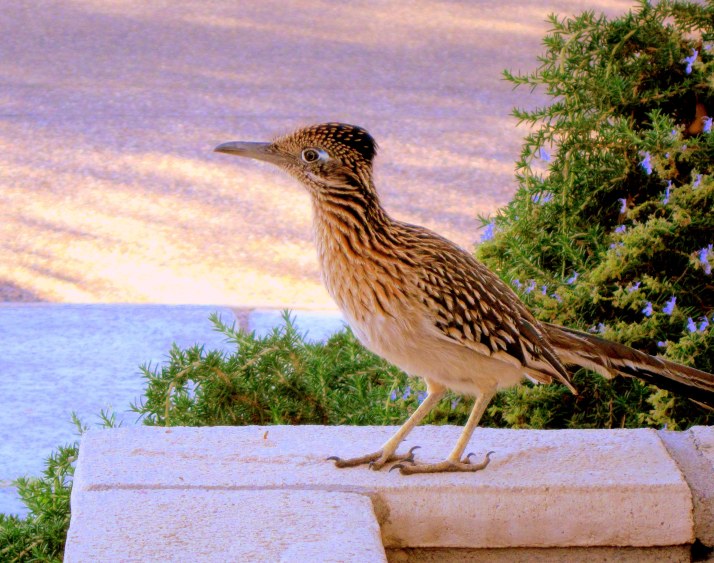 I’m  quite attached to this little roadrunner.  He/she (haven’t learned how to tell them apart) has been coming around since a little baby.   There are quite a few roadrunners in the neighborhood here in the low desert of Arizona.  They are attracted to the mesquite trees in my yard.  In fact, lots of birds are attracted to the shade of these large trees, and if you were to go walking under them at night a few half dozen startled birds would fly out of their roosts!  Click here  if you’d like to learn a few facts about them and hear what a roadrunner sounds like (they don’t actually go beep! beep! like in the cartoons).

A few years ago I took part in an ACEO (Art Cards Editions and Originals)art project on Wet Canvas.com painting or drawing on 2.5″x3.5″ cards.  When I decided to draw a roadrunner I looked all over the Internet but really couldn’t find a satisfactory pix of a roadrunner.  Well, now if anybody is looking to do a good rendering of a roadrunner I give permission to use my digital photograph as a model, BUT will reserve rights to photography and prints of digital photograph.

I like to use Picasa to edit and be creative.  Sometimes a “happy accident” will happen – just as it does when painting!  Something will happen that you didn’t intentionally execute, but – say – it doesn’t look too bad!