Green leaves so soft, so bright, so tender,

Emerging in the first blush of spring,

Bringing forth newness of life,

So fragile, so frail, ever so gentle

With the first bloom of life,

Swaying amidst the elements of love both seen and unseen,

Sharing with nature the joys of being.

Mottled orange and black with white 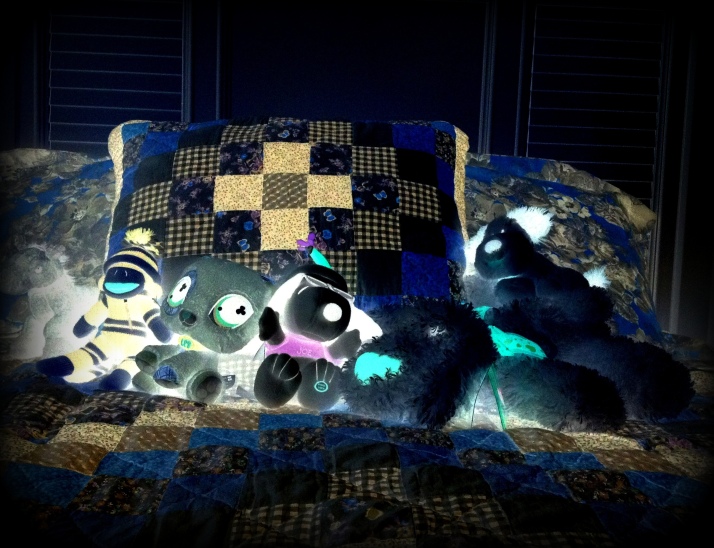 Gremlins on the bed

Where did my cats go?

This year the last two of our pet dogs died – and the oldest ones at that, making this the first time in twenty-five years that we haven’t had a dog.  Mandy died in August and we sort of put her out of our thoughts and mind. But every now and then DH and I would feel so sad and lonely without any little dogs to greet us, follow us and play with us – and just be there!  So one day a few weeks ago the groomer who used to bathe and trim our dogs posted a picture of a little dog that came right to her grooming shop – Laura’s Grooming. So she posted a photo of the little guy and I fell in love with him – so darling! After talking it over with hubby we decided to invite the little fellow home. Laura said if he wasn’t what I wanted she would take him back until she found someone that wanted him.

When I went to pick him up he practically jumped into my arms! I told Laura he must have some Jack Russell terrier in him to be able to jump like that! Well, to make a long story short, we couldn’t keep him. His energy level was super high, and DH has a multitude of ailments plus advanced age, and Buster (as we named him) would take a flying leap unto the couch – and his lap; scared the heck out of him! Then I remembered we can’t use a doggy door now because of our two kitties. Some neighbors around here let there cats out but I wouldn’t think of it with the coyotes living so close. And DH wouldn’t be able to let Buster out if I wasn’t home so, sadly, I decided (with my head) that it wouldn’t be a good idea to get a dog right now. Very sad. Maybe someone that has never had a dog for a pet won’t understand that, but anyone who has had a dog knows what I mean. 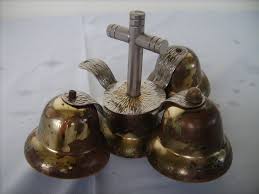 The Christ has come!

Gladness lights the hearts of man 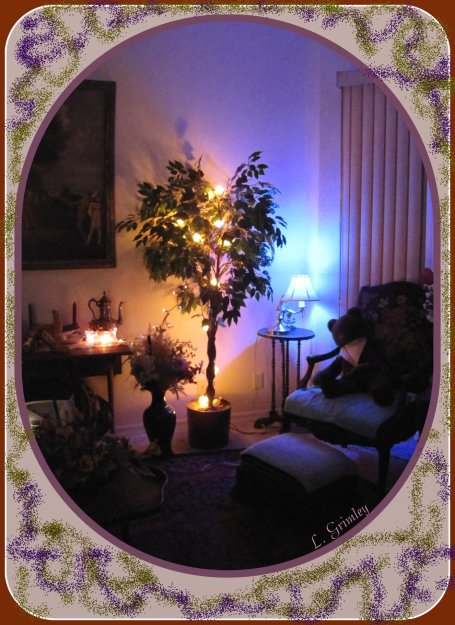 Welcome to our home this Christmas season!

This is sweet Mandy in her Christmas sweater. She passed away this August unexpectedly, even though she was almost seventeen years old. We miss her terribly – she was one sweet doggie!

Can you see the glow in the flower?

Oatman, Arizona is a very old town!  I’m reusing this photo because it’s the oldest thing I could find! 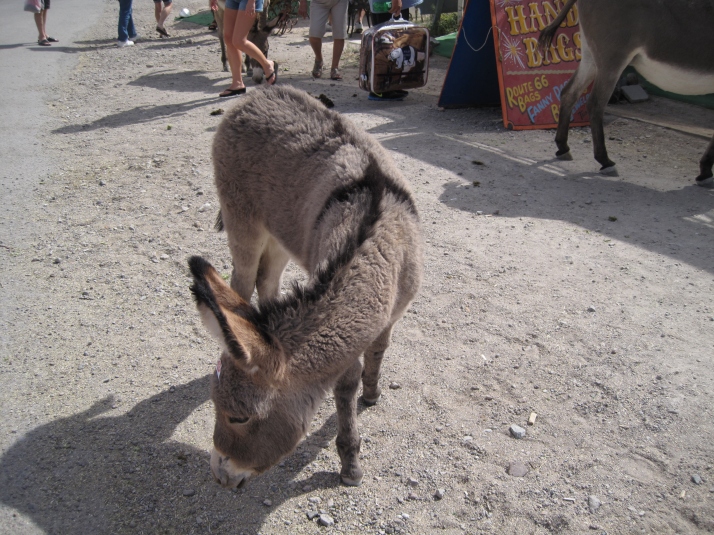 Who is that following me? 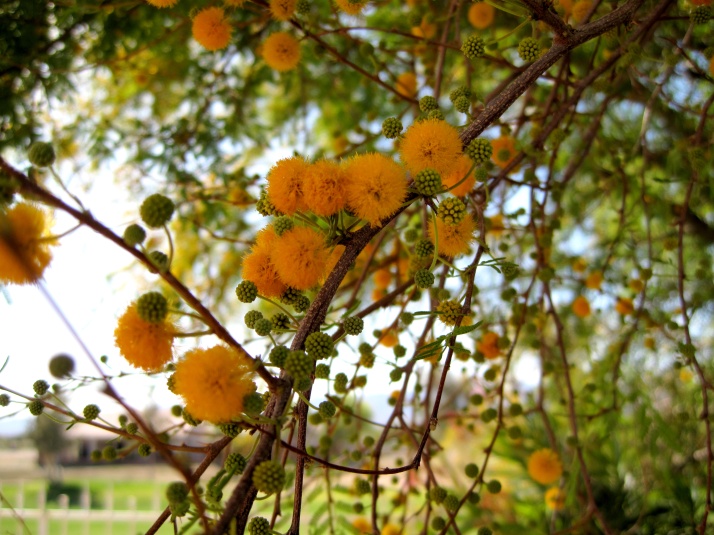 Sparky had such a sweet happy smile! 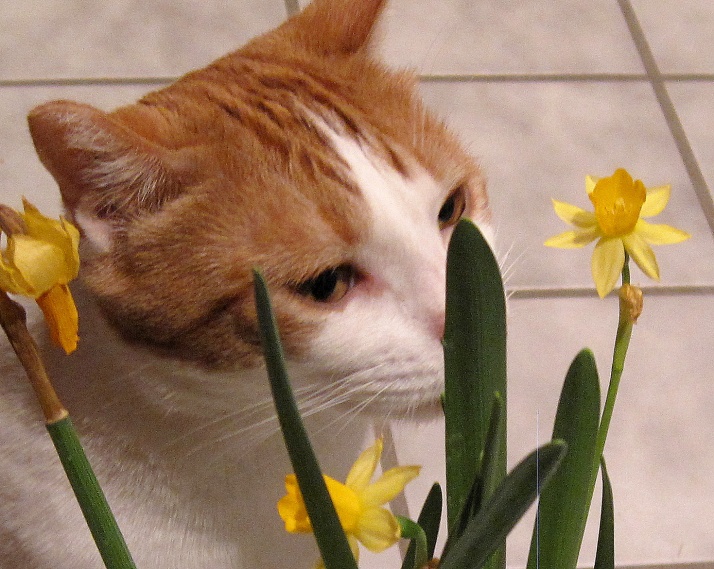 Sunday morning our dear pet, SparkyRipple, died.  She was fourteen years old,  and being a German Shepherd mix, that is a ripe old age for a dog her size.  But it still doesn’t help ease the grief of losing such a sweet pet.  Now she’s gone to cross over the rainbow bridge where Sushi, her dearest friend, will meet her. 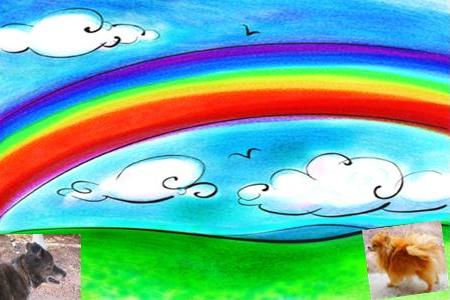 When Sushi passed away in 2007 Sparky was so forlorn and sad.  In 1999 when I left Arizona to go to Florida to await the birth of my grand-daughter and to help her mom for the first four months I  really missed our two dogs, Armstrong and Mandy.  So as a surprise for my birthday, my daughter gifted me with a pomeranian named Sushi that we had seen the week before and I had absolutely fallen in love with her .

A week or so later I received a call from my husband back in Arizona and he gave me the shocking news that someone had put a dog in our back yard – a German Shepherd mix!  We had never had a big dog for a pet, so I tried to talk him into taking her to the animal shelter but he just couldn’t do it – he really liked this little-puppy-about-to-be-a-big-dog.  In the end, we kept the dog and named her SparkyRipple – Sparky for short.   So he also was given a dog for a birthday present (we have birthdays just five days apart).  I left having two dogs and came home owning four!

When Sushi and I drove back to Arizona we had a wonderful bonding experience.  She enjoyed traveling as much as I did! The first week home Sushi got along with Armstrong and Mandy right away – Mandy was just a little bigger than her and Armstrong, our only male dog, kept to himself.  But Sushi showed a great interest in Sparky from the beginning.   She’d get really excited and want to play with Sparky but was a little afraid of her big size.  Slowly though she would inch closer to Sparky when she was laying down.  Pretty soon Sushi would go all the way up to her and give her a kiss.  They became best of friends, and as I said, Sparky really grieved when she died and the few times that she would come in contact with a little dog she’d become excited and would want to play and have the same type relationship she had with Sushi.  She had this desire until last year when Sunnie came into our lives.  Sunnie is our white and orange cat who was born and raised outside with dogs the first two or three months of her life.  So she had absolutely no fear of Sparky and won her heart right away.  After that, Sparky’s motherly instincts were satisified.

In the beginning of February Sparky started limping on her left front leg and I took her to the vet.  The vet examined her, all her tests were okay; she said Sparky had severe arthritis and put her on an Ansaid med.  It became a little better in a few weeks but then returned and I had a appointment to go back to the vet’s this week.  Her entire left leg became swollen and she definitely wasn’t feeling well Saturday night.  When I awoke at seven Sunday morning I went to the balcony overlooking the family room downstairs to see if she was in her bed, but she wasn’t, so I went downstairs to see where she was laying.  There she was, laying on the tiled dining room floor, the first room I would go into after coming downstairs.  After moving her back onto the carpet in the family room I stayed with her and she passed away about an hour and a half later.

Sparky’s Spirit lives
In me, in Roy and Mandy
She was such a joy!

I’ve sold quite a few Zazzle.com products with my pomeranian, Sushi, on them. She was my heart of hearts. She’s been gone about five years now but she lives on and is becoming popular around the world with her picture on magnets, keychains and the like.  Thank you Sushi! And for more splashes of orange go to Orange You Glad It’s Friday

For Paint Party Friday and Creative Every Day I have a fast sketch I did a few months ago and a WIP. My refrigerator was driving me crazy with so much junk stuck on the doors so I took everything off and organized and rearranged some of what was there before – and it looks pretty good! One of things I had was a magnetic strip of a bone, heart, and paw. So I took each piece out of the magnetic strip and had this great stencil of a bone, heart and paw! I’m not sure how to proceed from here. Normally, I’d just use some watercolor or acrylic paint but made the mistake of buying an art journal that doesn’t have thick pages and too much paint or water and the pages ripple terribly! So I’ll probably use stamps and tissue.  Are there any suggestions as to a glue that is least likely to ripple the pages?

I think a touch of orange cat will suffice for Orange You Glad It’s Friday – check it out for more touches of orange! Sunny just kills me the way she sprawls out on top of the furniture.

I’m sharing with Paint Party Friday and Pink Saturday since I’ve finished my pink butterfly key rack; and have included the finished version and the pix from last week before it was grouted. Which do you like best? I think probably because there was enough paint detail on the before-grout version, I could have done without the grout. 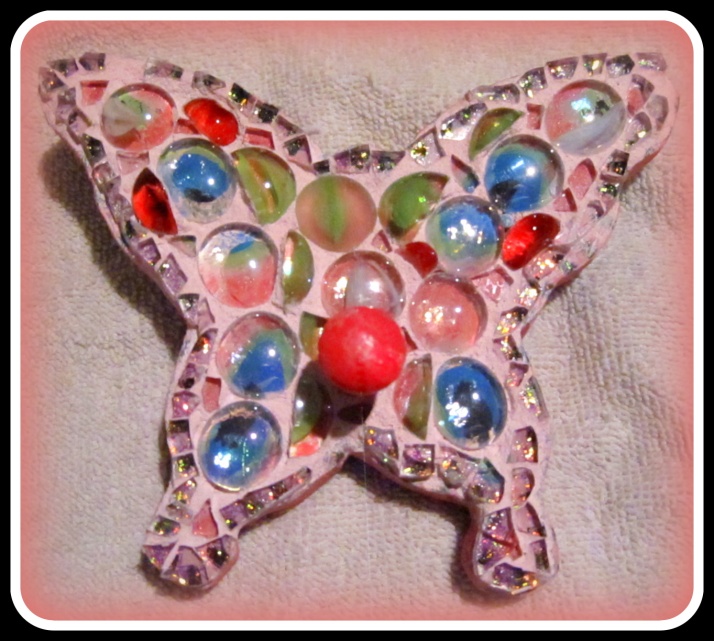 This is a pair of old Bakelite salt and pepper shakers inherited from my husband’s mother. They go back to between the 1920-1940s and have just sold on eBay – so recycled!

Has anyone seen this before? It has two little dolphins in it and when it’s  plugged in and turned on it slowly rocks up and down, and the little dolphins ride the waves back and forth! After being stored for a few years I misplaced the power pack – tried two or three that I did find but none worked.  But when I was packing up our little Christmas tree with it’s power pack it dawned on my that maybe the Christmas tree power pack would work (seeing that they were both generic – made in China –  and not Sony or some other brand name.)  Voila’! It worked! Now I must remember next Christmas where the power pack is! 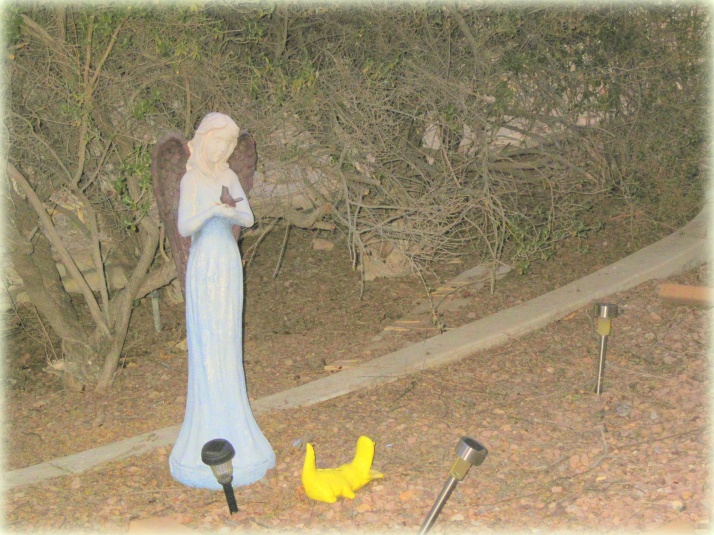 I haven’t taken too many photos this week, but took this one of my angel statue in the backyard with little bricks around her and the yellow garden hippo creating my small little “park”. 🙂

Waiting for the big day! 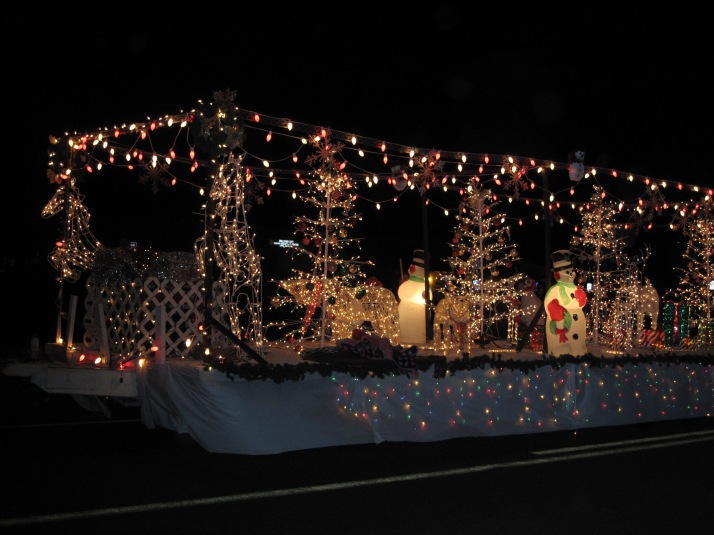 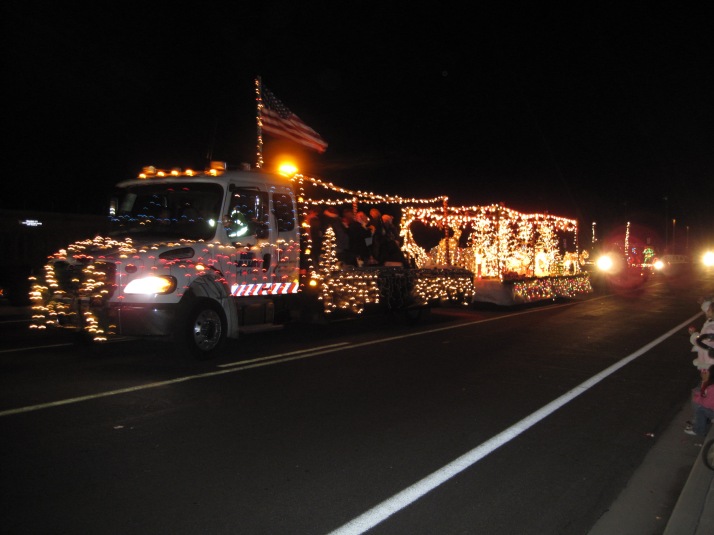 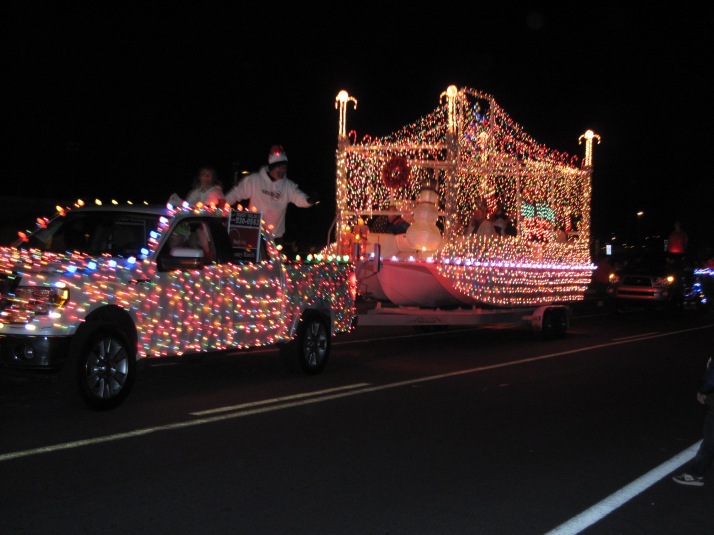 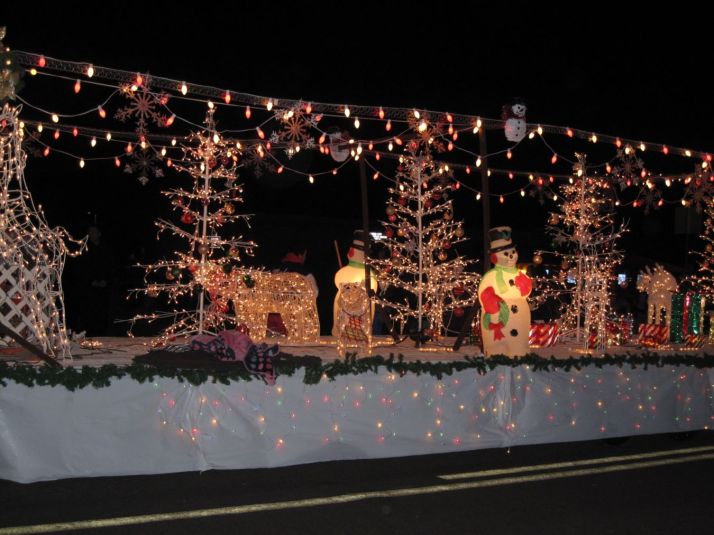 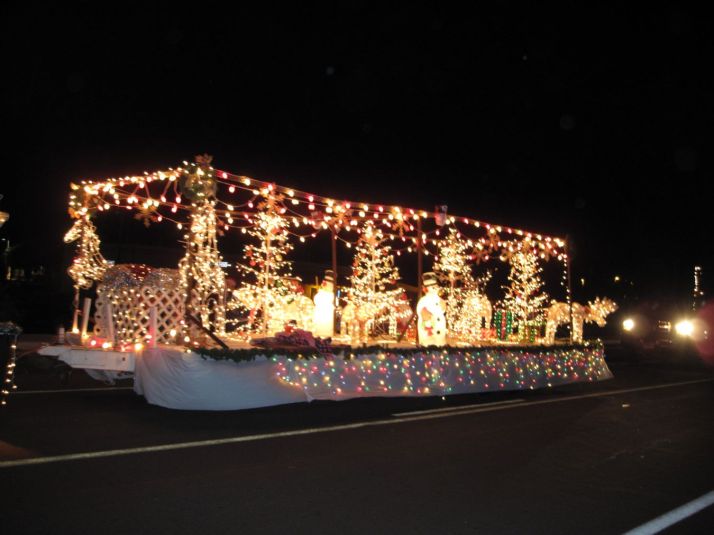 ‘Tis the Season – I missed the Bullhead City Holiday Parade this year, but these are photos from last year’s parade.

Suzi is trying to figure out how to turn on the light! 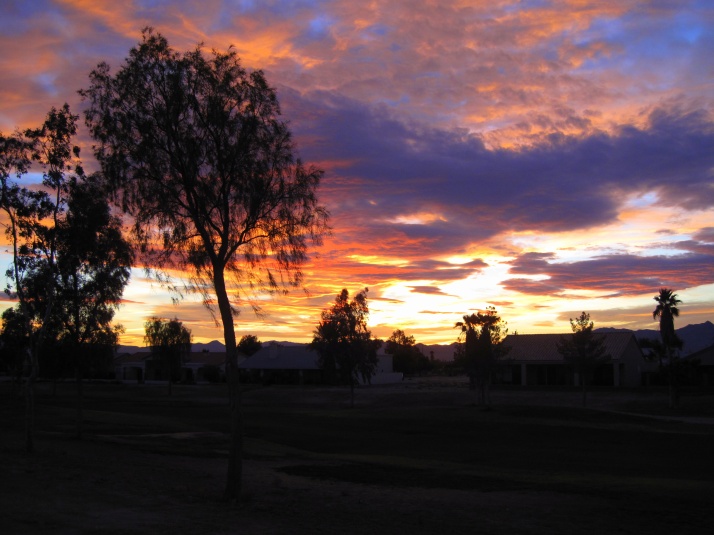 Here is our holiday living room. 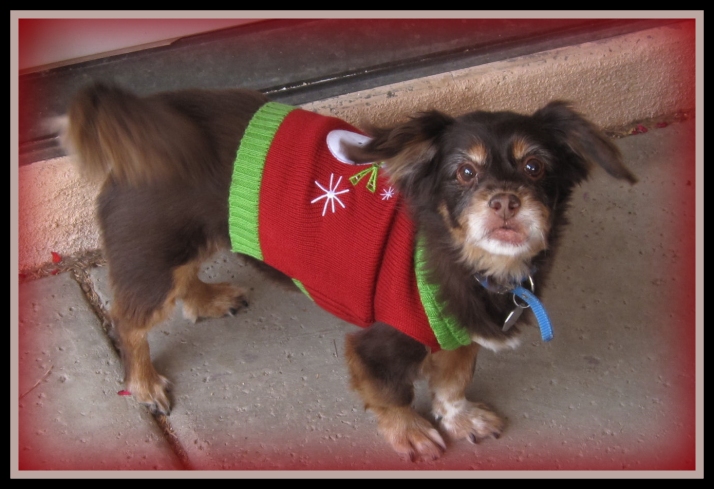 Mandy is calmly waiting for Christmas and a new doggie bone.